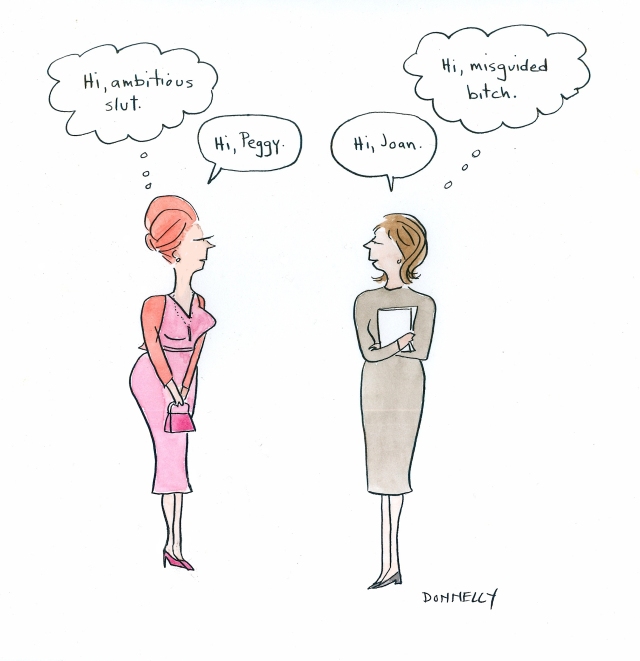 Mad Men hooked me last week and last night I became a fan. I was slow to come to the show, not convinced it was all that good (horrors). Perhaps I just didn’t want to revisit those years in such vivid detail. I was just a child when Mad Men is supposed to be happening, but I know enough about it to not like that time period in American culture. Following history, the show is now slowly introducing feminism. IMHO, they are doing it beautifully, with nuance and detail that most shows never get. The relations between the sexes are never black and white, and when it comes to womens’ rights, popular culture always wants to simplify and stereotype. My friend Gina Barreca, author and professor and expert on women and humor,  wrote about it in Psychology Today, and quoted me here.

The show last night used the subject of humor as a window into sexism, something our culture–again–doesn’t notice. It is thought that if someone doesn’t laugh at something, supposedly they don’t have a sense of humor. And who sets the standards for humor? The status quo. And in this case, on Mad Men set in the early sixties, it is the men.  If women don’t laugh at offensive cartoons meant to crudely poke fun at someone,  they lack a sense of humor. What follows is that women aren’t funny, either.  I wonder what kind of cartoons Peggy or Joan would draw about men. In a way, Peggy displayed her humor when she said, “I feel like Margaret Mead,” while watching a group of men behave like little boys.  That was a quiet joke, told only to another woman, not to the entire group. It would be too “risky.” Peggy and Joan choose to deal with all this differently. That’s as it should be, we are all different. But hating each other is not okay.

I have always wanted to be a cartoonist, beginning around the same time as Mad Men is depicting. It was a rough road. Not that anyone told me I wasn’t funny, not to my face. But trying to find a place to fit into the world of humor has been difficult. Luckily for me, the late seventies early eighties brought us Lily Tomlin, Whoopi Goldberg and other groundbreaking humorists that changed the face of humor. But it’s an uphill battle, every single day.