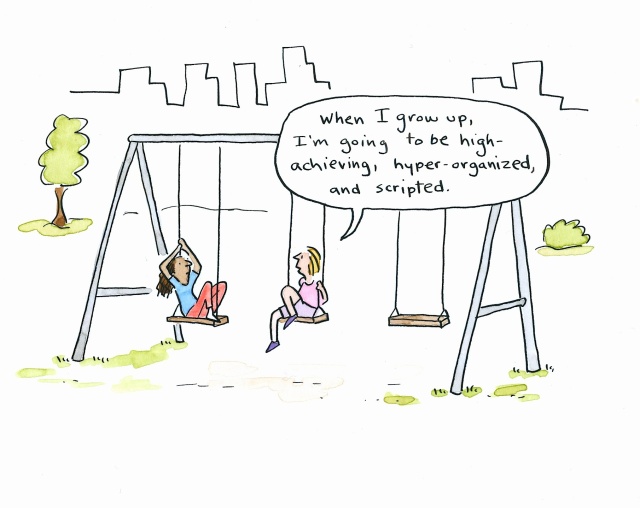 I’ve been working on a lot of talks lately.  Which is different than when I was young, when I was working on talking. I was so painfully shy,  it seriously worried my parents and my teachers.  As a young adult, I perfected the art of being quiet, and realized certain benefits. People would think I was smart–at least that’s what some told me. When I had to make a telephone call for a freelance job, I actually wrote down what I was to say before I dialed (yes, it was that long ago).  But the drawbacks of all this piled up, and being shy, quiet and deferential ate away at me.  No confidence, no public thoughts of my own. Except in cartoons. Cartooning saved me.

Now, I’m doing things I’d never dreamed of doing. Giving talks in small bookstores and to large groups in amphitheaters. And (hopefully not) being obnoxious about publicizing my new book.

Cartoonist and writer and live drawer for The New Yorker, CBS News. Speaker for TED and others. Books: Women On Men, http://www.narrativemagazine.com/store/book/women-men
View all posts by Liza Donnelly →
This entry was posted in About the book, Events, Random but Relevant and tagged Cartoon, Chronicle Books, public speaking. Bookmark the permalink.