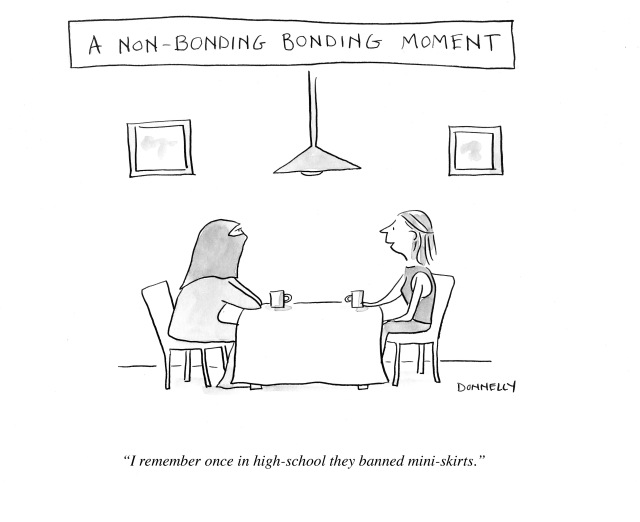 We Americans try to understand and sympathize with what is going on in Egypt.  It’s hard, but the least that we can do is try, like this misguided woman in the cartoon above.

An article in the New York Times yesterday profiled 26 year old Egyptian protest organizer, Asmaa Mahfouz.  Ms. Mohfouz had posted a video on youtube–a daring act by a woman in that part of the world–explaining her work and passion in helping to organize the uprising in Egypt.  She says,

“I felt that doing this video may be too big a step for me, but then I thought: For how much longer will I continue to be afraid and hesitant? I had to do something.”

How many of us American women have felt that? About anything–asking for a raise, a job, respect. Granted, it is not life-threatening for us to take risks in most cases, as it is in Ms. Mahfouz’s part of the world.  In our country, the decision to wear pants, when you know everyone else will wear a dress, is scary. That’s how different–or similar–we are with women in the Middle East.

I noticed on television, and read in the New York Times and DoubleX, that there are more women involved in the uprising in Egypt than in previous protests in the region. It was refreshing to see their faces on the streets, chanting and hoping for freedom along with their male counterparts. Who knows, could the measure of peace in the beginning of the protests–tragically gone now–have anything to do with their presence in the square?  I wonder.

When women take risks, and try to change things, it benefits all.  Amr Hamzawy, a research director at the Carnegie Middle East Center who has spent most of the last week in central Cairo, said,  “It’s very impressive. It’s not about male and female, it’s about everyone.”

Cartoonist and writer and live drawer for The New Yorker, CBS News. Speaker for TED and others. Books: Women On Men, http://www.narrativemagazine.com/store/book/women-men
View all posts by Liza Donnelly →
This entry was posted in News and tagged Egypt, Egyptian, Hosni Mubarak, New York Times, Protest, risk, uprising, women. Bookmark the permalink.