Style in Coats and Cartoons 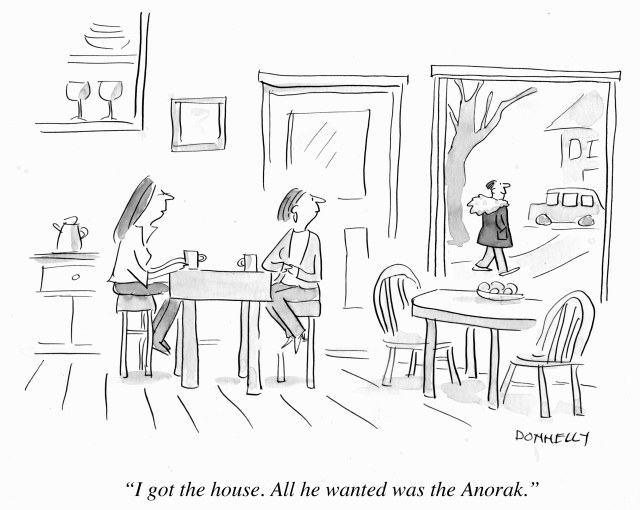 Before we hit spring, I wanted to post this cartoon. Because next year this particular type of coat will undoubtedly be out of style. Anorak is not only a funny word, it is a funny coat.  They only really look good on folks who live in Alaska, or twenty three year olds. The man in this cartoon should not be wearing one, but it makes him feel hip and young.

Cartoons are little stories sometimes. The cartoonist has to set a stage, people it with characters that have back-stories. The man and woman in this cartoon have just divorced, lived a relatively comfortable life-style wherein the couple bought an Anorak on a whim.  Perhaps they used to share the Anorak. Perhaps they fought over the Anorak, and that is why they divorced. Also, they are “educated” enough to know that such a coat is in style (or was).  The woman speaking has a sense of humor, fully developed from years of living with the Anorak man. The man is about to have his mid-life crisis with an Anorak.

Everything in the cartoon should work towards the idea, and not distract from it. Unless your style is such that certain type of detail is part of your style (Victoria Roberts, Roz Chast, Michael Maslin). Mine isn’t—my style is minimal. Not as minimal as some (James Thurber or Charles Barsotti or Bruce Eric Kaplan).  Most of us have developed our styles over time, and it’s not a deliberate choice. Although a few cartoonists I know changed their styles quite consciously (Lee Lorenz, Drew Dernavich).We draw the way we do because most of us have been drawing since we were young, and it’s what we know. It evolves as we age. Sort of like clothing.

3 Responses to Style in Coats and Cartoons