The Steubenville Case and The Power of Humor 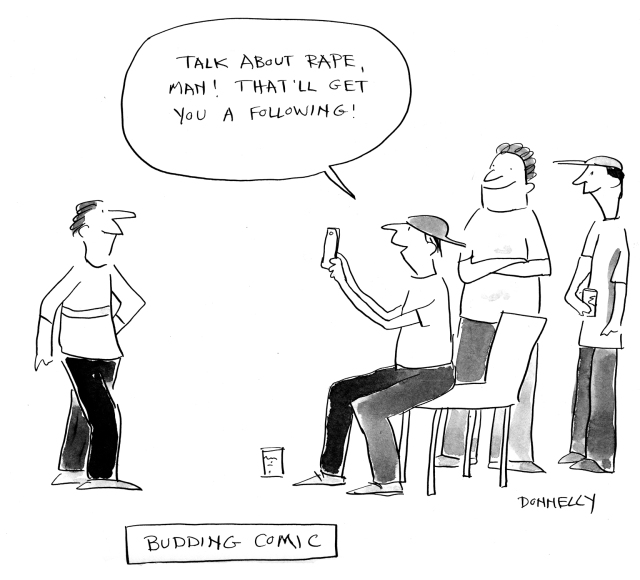 Had it not been for social media, we might not know about the horrible things that were done to the young woman that night in Steubenville, Ohio. Sadly, the attitude and behavior of the young football players, to a degree, is perhaps played out all over the country every weekend. Alcohol fueled rowdy group conduct can lead to horrible misconduct; in this case, it led to a form of gang rape.

This morning, I watched a video of one of the young men who was present that night. Watch it at your own risk–it is disturbing.  The cell-phone video is trained directly on one young boy for twelve minutes as he delivers one liners about rape, death and the young woman,  over and over again to the laughter of a some in the room. My shock at what was being said was compounded with wondering why is the camera focusing solely on him.  At one point, the person doing the filming is heard to laughingly say to his subject, “I’m going to watch this over and over again.”  It dawned on me: this young man in front of the camera is a wanna-be comedian. He is telling jokes made at the expense of a passed out, violated young woman (who is not in the room).

There is a strain of comedy in our country that makes fun of others beyond the bounds of civility.  I am not saying that derogatory humor aimed at insulting, harassing, belittling and ridiculing women is gang rape, but it is a kind of shared, group attack that many feel is okay to do. Because it is shared by a large number of people in the room (auditorium,  computer screen), it is somehow acceptable.  Humor is a powerful tool and when used in this way is extremely hurtful to others, and worse. It continually perpetuates disrespect and hate in our society.

Cartoonist and writer and live drawer for The New Yorker, CBS News. Speaker for TED and others. Books: Women On Men, http://www.narrativemagazine.com/store/book/women-men
View all posts by Liza Donnelly →
This entry was posted in News, Random but Relevant and tagged humor, Rape, Social media, Steubenville, Steubenville Ohio. Bookmark the permalink.

8 Responses to The Steubenville Case and The Power of Humor