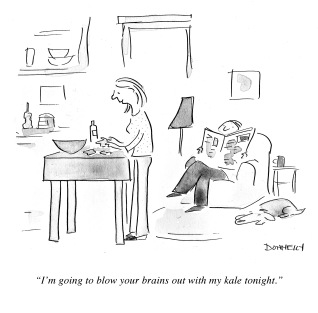 I think maybe we can stop obsessing about kale now. It’s time to focus on another green leafy vegetable. How about mustard greens (who need another name, don’t you agree?)?

And then when we are done with green, we should focus on yellow vegetables, like squash.  Once we go through the vegetables, why not switch to doughnuts? There are so many colors to chose from. And you know it is fun to draw cartoons about doughnuts.

I began drawing about food for The New Yorker in the 1980’s with a cartoon about risotto, which had just become famous. In other words, Americans in upper middle class circles noticed risotto, and writers about food followed suit (or the other way around). 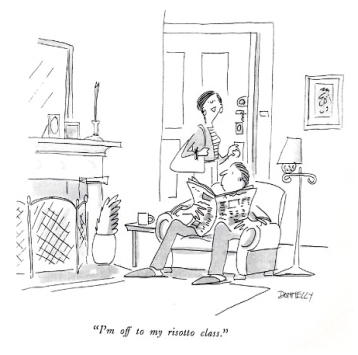 My cartoon was even quoted in the New York Times back then.  Then ten years later, risotto seemed to need another cartoon done about it, and I stepped up to the plate.  This time, it was less about the word risotto, and more about the people trying to make it.

And I cannot leave out radicchio. I did a cartoon in the 1990’s about that leafy bitter miracle. 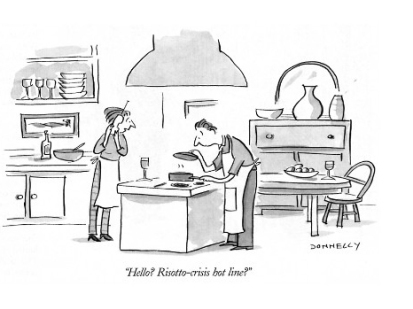 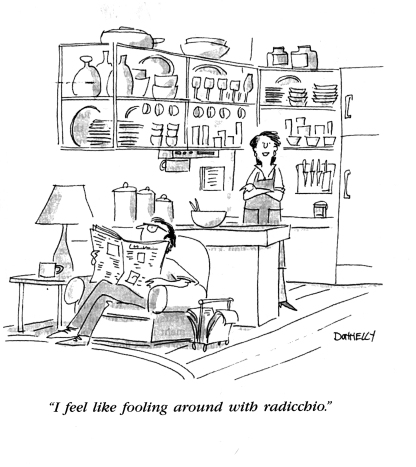 Cartoonist and writer and live drawer for The New Yorker, CBS News. Speaker for TED and others. Books: Women On Men, http://www.narrativemagazine.com/store/book/women-men
View all posts by Liza Donnelly →
This entry was posted in Random but Relevant and tagged cartoons, food, kale, New York Times, New Yorker, radicchio, risotto. Bookmark the permalink.

3 Responses to Too Much Kale